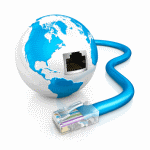 According to recent surveys around 65% of businesses in rural areas are finding that their internet speed is an issue.  Research has shown that speedy broadband in non-urban centres can have huge benefits for the communities and the economy.

Rural areas are rarely supplied with cable fibre broadband even though this is where the gretaest need exists. It is more profitable to lay cable in cities and towns where customers are much closer together. (Fibre optic broadband does not lose any speed of internet over distance.) The majority of broadband in rural areas is provided through ADSL.

ADSL is passed over the BT copper cable network.  The network covers much of the UK but the problem is that internet signals over copper cable lose speed over distance.  Therefore, where rural areas are a long distance from a telephone exchange significant speed is lost.

In the most remote parts of the UK, it’s not even possible to get reasonable let alone fast ADSL broadband.  Some communities have opted to go for satellite broadband as the only means to gain faster broadband.

Just over 10% of people responding to surveys have said that mobile broadband provides decent 3G connectivity.  This is really serious for businesses that are trying to contact customers the go on their laptops, tablets, and smartphones.

The Argument for Better Broadband in Rural Areas

There’s a real argument going on that investment in rural broadband would provide the impetus that businesses are looking for to expand, take on new staff and generally boost the economy.

The balance of business growth would be improved if more rural areas were developing significant businesses with the capacity to expand.  In addition, flexible working conditions and opportunities would be far more viable with better broadband in rural areas.

In cases where you often have to travel a long distance to get to work, improved broadband really would help with lifestyle and work-life balance.

At the moment, large parts of the countryside do not have the mobile broadband or fast landline broadband which are necessary to allow people to work from home.

At the moment the government is rolling out plans to provide super fast 24MB+ broadband to 90% of the country.  The goal is to have Britain at or near the top of national broadband lists.  The minimum broadband the government wants available in the UK is 2MBps.

It’s important that business owners choose a business solution where they can.  You can get real added benefits through prioritisation of traffic, improved data allowances, faster upload speeds, better customer service and much more.

There are some excellent business broadband providers out there such as XLN and Plusnet Broadband.  Develop a shortlist of providers offering connectivity in your area and compare them like for like. Oh yeah… and keep on lobbying Westminster to get fibre optic broadband to your locale.

Phil Turner was planning to change ISPs and checked out XLN on this page of the uSwitch site, http://www.uswitch.com/broadband/providers/xln_telecom/ because he had heard gppd things about the company.